Pop singer Rihanna has flaunted her enviable figure in lime green lingerie as she promotes her latest collaboration. 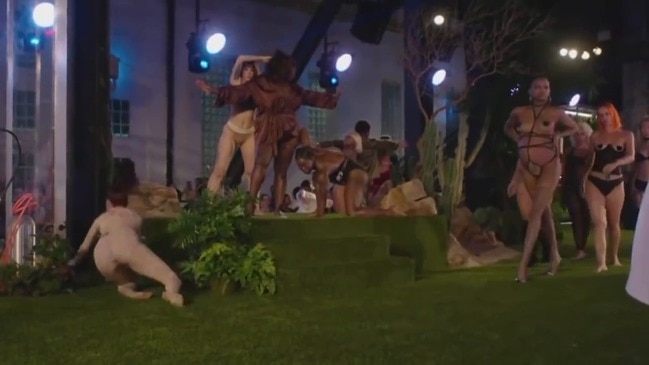 Rihanna's runway show featured women of a variety of races and body sizes, two of whom were visibly pregnant.

Rihanna showcased her sensational figure as she modelled lime-green lingerie from her Savage X Fenty line in a new campaign shoot.

The fashion and beauty mogul proved to be her own best advertisement as she posed for a series of shots in the sexy garments.

The 32-year-old commanded attention in a delicate lace bra and matching briefs, which accentuated her posterior with daring cut-out detailing.

The Grammy-winning hit maker complemented the saucy ensemble by working her waist-length locks in a natural curl that cascaded down her shoulders.

Her sizzling shoot comes after she proudly boasted about the success of her lingerie line, admitting that she's "usually humble" but refuses to be for Savage X Fenty.

"New Savage for de gal dem!" she captioned a collage-inspired picture of the singer lounging in a sexy purple bra and garter set.

"Wanted to give y’all an extra drop cause we turned 2 years old and you guys have been incredible supporters, believed in our brand, appreciated what we stood for, and Of course bought hella @SavageXFenty," she added.

Posting a second snap of the same lingerie set, she added: "get into this bra tho … like I’m usually humble but not about lingerie @SavageXFenty."

Recently, it was revealed that Rihanna has so far donated $US5 million to global coronavirus relief via her Clara Lionel Foundation, and also pledged to donate another $US1 million alongside Jay-Z to help those in New York and Los Angeles, two of the worst-hit cities in the US.

The Umbrella singer also said that her donations will be particularly aimed at domestic violence victims who are at risk of the violence getting worse due to being at home.

But the Bajan beauty's generosity doesn't end there as her lingerie brand stopped business globally today for "#BlackoutTuesday" in the fight against racial inequality and injustice.

MORE: Calls for ‘racist’ radio hosts to be sacked

The singer appeared in the gorgeous photos for her lingerie line. Picture: Savage X FentySource:Supplied

The planned social media initiative, which first circulated on Friday, is to protest racism and police violence in a message of solidarity in response to the death of George Floyd in Minneapolis.

In light of today's social media movement, a message on Rihanna's lingerie line, which was also shared on her brand Fenty Beauty and fashion collection Fenty, explained that this is "not a day off" but a "day to reflect and find ways to make real change".

"The fight against racial inequality, injustice, and straight up racism doesn't stop with financial donations and words of support."

The statement added: "In solidarity with the Black community, our employees, our friends, our families, and our colleagues across industries we are proud to take part in #BlackoutTuesday.

The message ended with places their customers could donate including Black Lives Matter NY, Reclaim the Block and The Bail project.

Rihanna has already been vocal on social media alongside Oprah, Taylor Swift and Beyonce to spread awareness and make a change.

Since Floyd's death, protests have erupted all over the United States.

The 46-year-old died after Officer Derek Chauvin was filmed kneeling on his neck.