Channel 9 reporter Ben Avery has been ambushed live on air by protesters in London, as attacks on journalists continue to escalate. 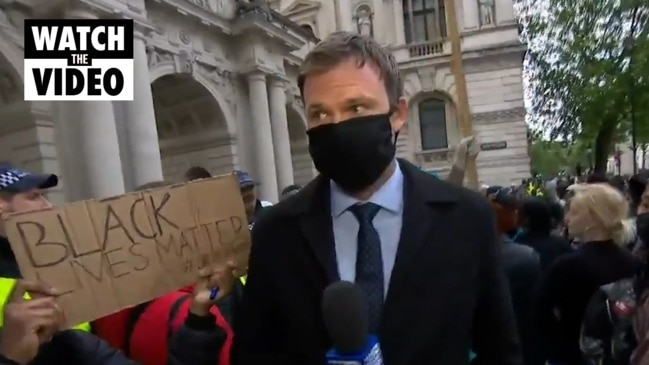 A second Australian reporter, Ben Avery, has been involved in an altercation on camera just hours after Aussie Europe correspondent Sophie Walsh from the same network was grabbed in London.

A second Australian reporter has been involved in an altercation on camera just hours after an Aussie Europe correspondent from the same network was grabbed in London.

Channel 9 reporter Ben Avery was reporting live on Today this morning when protesters began to surround him and yell at the cameraman.

Protests relating to the death of George Floyd, an African American man who died after a white police officer pressed his knee to his neck, have spread across the world.

The protests in London had started out peacefully yesterday however are becoming increasingly violent and tense.

Avery, reporting in the thick of the escalating protests, was told to leave the area by police. However as he was backing away, footage shows one of the protesters grab his microphone out of his hand and run away.

“We’ve been told to walk away from the danger here but it’s been following us,” Avery said as he lost his microphone.

Avery continued to flee the scene with his cameraman still recording until a handful of police were seen on camera running towards the increasingly angry protesters.

#BREAKING: Nine News Europe Correspondent @benavery9 has had to abandon his coverage as protesters clash with police in London. #9News pic.twitter.com/xL3x7ACdvj

Speaking on Today later, Avery said he and his camerman Cade Thompson had tried to escape the angry group earlier in the day but they had caught up with them.

“It had been bubbling away for quite some time...we’d had a bit of agro from people who for some reason had something against the media and we tried to move away from them but they followed us to that spot where we were doing the live cross,” he told the breakfast program.

“The attack basically began a few minutes before we went on air and you can see just as we went to air ... the camerman almost having the camera pulled from his hands and then I’m trying to walk backwards and keep talking but then we see a guy simply takes the microphone from my hand and then off he goes.

“As we were running off there was a crowd of possibly 50 people running towards us, throwing bottles, they were shouting at us, having a good go at our security guard who at one stage had about 15 guys around him...luckily we got to the UK parliament and the police were there.”

Despite the worrying attack, Avery said his experience didn’t reflect what had gone on at the protests.

“There were tens of thousands of people there in Hyde park getting their message across without any agro...they were chanting and having a lot to say but there was no pushing or shoving, police just watched on and a lot of them went home after that,” he said.

“But a few hundred hung around and started causing trouble at Downing Street then for whatever reason, groups of them were charging at police, there were scuffles on the ground, they were getting pelted with bottles.

"I actually think it was a small percentage of these protestors that have given the whole protest a bad name."

"I actually think it was a small percentage of these protestors that have given the whole protest a bad name." @benavery9 talks about being ambushed live on air while covering protests in London. #9Today pic.twitter.com/UC9mXmHCrL

Prime Minister Scott Morrison has since commented on the international anti-racism and anti- police brutality protests, urging Australians to be careful.

“Already we have had to provide support for those in the media sector, for journalists who have found themselves in those situations, and of course we will continue to provide that support,” Mr Morrison told reporters in Canberra today.

“But I would urge people to be extremely cautious. These are dangerous situations and people should exercise great care in where they’re placing themselves.”

Walsh was broadcasting to Adelaide at 6pm last night about London’s protests when she began to scream.

The attack was not captured on film but Walsh was clearly distressed in the live audio feed.

Thank you for your messages. The man has been arrested for threats to kill and carrying a weapon. I’m shaken but ok. Big thanks to my incredible camerman Jason Conduit who chased him down armed with a light stand and got him arrested. https://t.co/YRxrUB3j4l

The network reports the man shouted “Allahu Akbar” while making motions to stab her before he was chased down by camera operator Jason Conduit.

The alleged attacker was arrested for threats to kill and for possessing a weapon, Nine reports.

The attack on Walsh also comes less than 48 hours after an Australian crew from Channel 7’s Sunrise program were turned on by police while covering protests in Washington DC.

Seven US correspondent Amelia Brace and camera operator Timothy Myers were giving a live update from outside the White House when they were shoved by heavily-armed police.

US protests: Journalists are being attacked by police while doing their jobs

Hundreds of journalists are being attacked by police while covering the George Floyd protests in the US.

Brace was clubbed with a truncheon and Myers was struck with a riot shield.

Speaking on Sunrise yesterday, Brace said they were both “worse for wear” today, admitting they were probably running on “adrenaline” in the wake of the attack.

“I can feel across the back of my shoulders where I got whacked by the baton, and we have these welts from the rubber bullets – it’s similar to if you got shot too closely by a paintball gun,” the reporter explained.

“We just are glad that the bullets were rubber and not real bullets — I would have panicked if I hadn’t realised that it was not a real bullet.”