Former England captain Michael Vaughan has labelled the unjust treatment of one of the country’s World Cup heroes a “disgrace”. 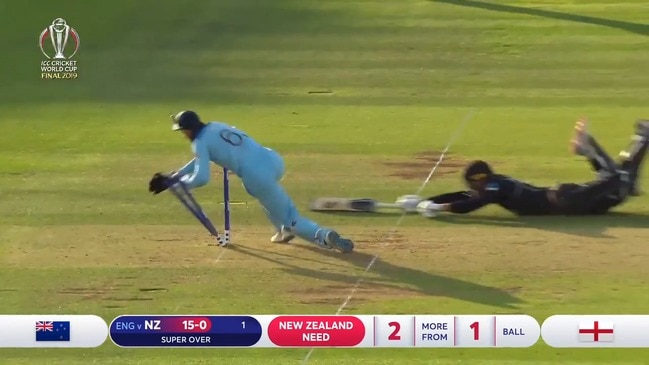 Video obtained Monday, July 15, 2019 of England winning the 2019 Cricket World Cup final against New Zealand. After the scores were tied after 50 overs and also tied at the end of a super over England won the game after a boundary countback. England scored nine more boundaries than New Zealand. (AAP VIDEO/ICC)(NO ARCHIVING AAP VIDEO BEYOND 48 HOURS)

Plunkett claimed 11 scalps at a stellar average of 24.72 during the five-week tournament, including the critical wickets of Black Caps skipper Kane Williamson and opening batsman Henry Nicholls during the enthralling final.

The hosts did not lose any of the seven matches Plunkett played during the 2019 Cricket World Cup, his deceptive variation with the ball proving a valuable weapon on the inconsistent wickets.

Almost 14 years after making his international debut, the Yorkshire paceman guided his nation to their maiden World Cup title in arguably the most significant moment of his professional career.

However, two months later, Plunkett was brutally excluded from England’s contract list for the 2019/20 season, and found out about his omission on social media.

Plunkett expressed his frustration on Twitter in a post which has since been deleted: “I am really happy for all the boys who got contracted. I am not having a pop at anyone just disappointed I didn’t get one.”

”Moving into a new cycle of four years … (Plunkett) probably didn’t fit those future needs for the next 12-24 months, which is tough,” Giles said.

“He’s one of the most physical men we have in our line-ups. He’s incredibly fit and strong, but in terms of the numbers, I guess his paces have been down a little bit for some time.

“His best came in that role in the World Cup, and the World Cup final. He should be really proud of that achievement, and what they did as a team, but everything moves on for all of us.”

In May, England unveiled a 55-player training squad which would prepare for the upcoming summer of cricket. The team was comprised of cricketers who could potentially represent England in any of the game’s three formats.

Once again, Plunkett was not named.

Speaking on The Tuffers and Vaughan Cricket Show, Plunkett conceded he thought he was treated “really badly” following his heroic World Cup performance.

“For the selections this winter, I found out from Twitter that I wasn’t involved in the squad, which obviously disappointed me because I’d been involved in that World Cup,” Plunkett said.

“I think if someone just spoke me and just said, ‘Listen, this is the route we’re going, we’re going down a bit younger, you’re not going to play in the next World Cup’, I’m happy. I’ve just played the last four years, won the World Cup, I’m more than happy to step aside.

“I’m not going to sit and be upset that I’m not in, I’m not bitter about it. Eight months ago, I was disappointed with the way it was dealt with, but now I want people to come in and do well, I’ve got nothing against them.

“Do I feel like I’m still good enough to be in that one-day squad? Absolutely. But they’re going in the direction of the younger group for the next World Cup, so that’s fair enough for me.”

Former England captain and Fox Cricket commentator Michael Vaughan was shocked by the revelation Plunkett had not been personally notified of his omission.

“The most disappointing thing … was that after the World Cup final, he won England a World Cup with a group of players and management, and not one person rang him up. Not one person,” Vaughan said.

“He had to find that out through Twitter. I’m sorry … that doesn’t happen in this era of cricket. That’s a disgrace.”

Plunkett’s wife is American, and the 35-year-old has not deserted the possibility of playing international cricket for the United States.

“It would be nice be involved in some sort of cricket over there. My kids might be American, so it would be quite cool to say to them that I played for England and the US,” Plunkett said.

“I’m English, and I’ll always be an Englishman, but if I’m still fit and there’s an opportunity to play at the highest level, why would I not take it?”

Plunkett had played 124 matches for England, claiming 201 international wickets at an average of 30.71. The paceman’s best performance against Australia came during an ODI in June 2018 when he finished with figures of 4/53 in Cardiff.

When Plunkett first faced Australia in 2007, he came up against a team comprised of the likes of Glenn McGrath, Nathan Bracken and Matthew Hayden.