Dozens of animals have died due to floods in a World Heritage-listed wildlife reserve in India including four rhinos found drowned this week. 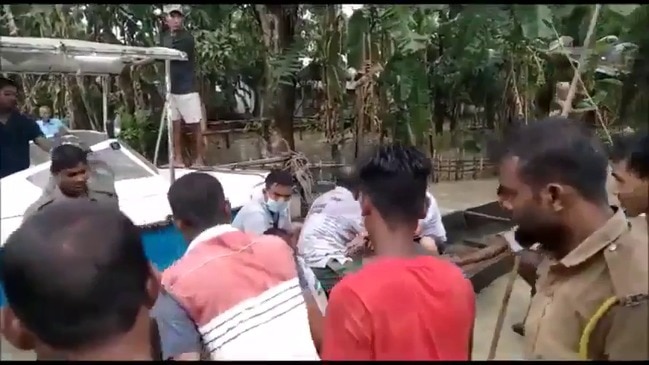 A female rhino calf was said to be in a stable condition at the Kaziranga National Park in Assam, India, on July 15 after becoming separated from its mother during flooding the day before. This footage shows the rhino being brought by boat to the national park’s Centre for Wildlife Rehabilitation and Conservation. “A female rhino calf was separated from her mother due to high flood,” the park said on Twitter. “As we could not locate the mother, team CWRC along with Kaziranga staff rescued it and [it is] currently under care at our rescue centre.” The park said the calf was “currently stable” and “under constant observation”. According to the Hindustan Times, 90 per cent of Kaziranga National Park has been affected by flooding, and dozens of animals, including two rhinos, have died or been injured as a result. Credit: CWRC at Kaziranga National Park via Storyful

Dozens of animals have been killed or injured after the Kaziranga National Park was inundated with floodwater.Source:Supplied

Several rhinos have drowned and a baby calf was separated from her mother after a 430sq km reserve in India was flooded by torrential monsoon rains, which have killed more than 100 people in recent days.

Around 90 per cent of Kaziranga National Park is underwater in the northeast state of Assam.

A male and female rhinoceros were found dead on Tuesday and two more later in the week.Source:News Corp Australia

A villager walks with his cattle at Buraburi village in India's northeastern state of Assam. Picture: Biju Boro/AFPSource:AFP

“I can say that it’s one of the worst floods in the state and in the park in the recent times,” Assam’s Minister for Forests, Fisheries and Excise Parimal Suklabaidya told AFP.

Authorities this week confirmed a male and female rhinoceros were found dead on Tuesday, among dozens of animals killed in the monsoon season which runs from July until September.

The Times of India on Friday reported two more rhinos had drowned in the floodwaters.

The carcass of another male rhino, which reportedly died due to natural causes, was found in late June.

The rhinos at the rehabilitation centre in Kaziranga. Picture: Chief Minister of Assam Sarbananda Sonowal/TwitterSource:Twitter

A bulletin issued by park authorities on Wednesday stated 66 wild animals had died with 23 of those deaths attributed to drowning, The Hindustan Times reported.

Twelve hog deer were hit by speeding vehicles and another 44 had been injured due to floods.

The park’s animals are often pictured crossing the national highway during floods each year, seeking the safety of the hills of the Karbi Anglong district.

Rhinos were seen moving to higher ground at the World Heritage-listed reserve which covers 42,996 hectares and sits in the Brahmaputra Valley flood plain.

“The park is one of the last areas in eastern India undisturbed by a human presence,” the World Heritage Convention states.

“It is inhabited by the world’s largest population of one-horned rhinoceroses, as well as many mammals, including tigers, elephants, panthers and bears, and thousands of birds.”

A rhino calf is “doing well” in the park’s Centre for Wildlife Rehabilitation and Conservation after she was rescued from the rising water.

“A female rhino calf was separated from her mother due to high flood,” the national park and tiger reserve said on Twitter.

“As we could not locate the mother, team CWRC along with Kaziranga staff rescued it and (it is) currently under care at our rescue centre.”

Mr Suklabaidya, the state’s forest minister, said two of three tigers that swam outside the area had to be guided back into the park.

A female tiger was tranquillised by forest officials after she strayed into a thatched hut in a nearby village due to rising waters.

The tigress was also taken to the rehabilitation centre and was today released back in the park.

Prince William and Catherine, Duchess of Cambridge, visited the Kaziranga National Park in April 2016, feeding elephants and patting rhinos during a week-long tour of India and Bhutan.

The homes and communities of nearly four million people in Assam have been flooded or damaged by heavy rains, with 33 people killed in the last 10 days.

According to The Hindu, five people died across four districts in Assam on Thursday alone.

The current deluge to hit the area is also impacting Bangladesh and Nepal.

In Bangladesh, authorities said conditions had improved slightly but nearly one-third of the delta nation was still under water.

Villagers travel on a boat at Gagalmari village in the Morigaon district of Assam state on July 14, 2020. Picture: Biju Boro/AFPSource:AFP

The Brahmaputra, a mighty Himalayan river system, burst its banks late on Wednesday and flooded a border town and several villages.

In Nepal, 67 people have died and 45 are missing after landslides and floods triggered by the rains since Sunday last week, with the army and police searching for survivors.