Animal rights groups are up in arms again after an annual whale slaughtering festival turned the sea blood red. 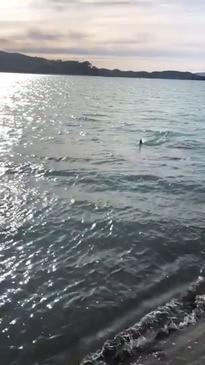 A pod of orcas delighted people gathered on a strand near Raglan, New Zealand, swimming into shallow water close to shore as they hunted. Credit: Chris Williams via Storyful

Animal rights groups are mourning the loss of hundreds of whales, slaughtered on a remote north Atlantic island in a controversial annual festival that’s been running for more than 1000 years.

Every summer, those living on the Danish-owned Faroe Islands slaughter hundreds of whales and dolphins as they prepare for the harsh winter months ahead.

The Grindadràp festival involves hunters rounding the animals up with their boats before forcing them into a shallow bay and slaughtering them with spears.

The whales are driven towards the shore, seen in this file photo from May 2019. Picture: Andrija Ilic/AFPSource:AFP

The mass killings are integral to the community’s food supply, however the festival is also a controversial one as the brutal hunt turns the surrounding ocean red.

This year’s festival involved the killing of 252 pilot whales and 35 dolphins, according to animal rights organisation Sea Shepherd.

The organisation, whose ships have been banned from entering the bay, described the hunt as “barbaric”.

In a statement, Sea Shepherd said: “252 long finned pilot whales and 35 Atlantic white sided dolphins were killed in Hvalba last night after the huge pod was found off Sandvik,” reported The Standard.

“This is the first organised Grindadràp hunt of 2020 with the meat from the hunt distributed first to the approximately 70 hunt participants from the boats and those killing on the beach – and then the remainder to villages on Suðuroy with all recipients then free to sell their share of the meat if they so wish.”

The Faroe Islands, which is about halfway between Norway and Iceland, passed legislation in 2014 to ban the Sea Shepherd organisation’s boats from its waters after the animal rights group was able to block the hunters and disrupt the annual slaughter.

The organisation’s ban from the archipelago mean there aren’t any pictures from this year’s hunt, however photos from last year show how quickly the water turns red from the killings.

The ocean runs with blood after the killings. Picture: Alastair Ward/Triangle NewsSource:Supplied

More than 100,000 pilot whales swim close to the Faroe Islands each year with the Faroese typically hunting around 800 whales annually.

ORCA, another animal rights organisation based in California, also mourned the deaths of the animals.

To the beautiful family of pilot whales that were brutally murdered in the Danish #FaroeIslands, we are so deeply sorry... We will keep fighting to end this insane blood sport. RIP beautiful family...